by admin
in News

Today, how many friends do you have on social media? Some may say 500, 1000, or even 2000+ through any social network platform such as Facebook, Instagram, or Tiktok. Offline, every year, we send our Christmas and New Year’s postcard to our relatives and friends but only 3-4% are really existing in our social loop.

This research paper came from a conversation that I had with my previous client. He mentioned, “The bigger the team, the better performance”. He urged that a larger team is better for success because people in the team can solve problems together and a larger organization is better for success. But, is it true? Many large-scale organizations are facing achieving their desired result. On the other hand, what should be focused more in order to achieve the organizational KPI is “How do teams can work together”.

What Is a Team?

Team size can be a significant factor related to workplace initiatives. My client said, “I have a problem with a member of my team who does not act independently”. As The success of a team is deeply related to the initiative of team members, the larger the team grew, the less initiative it took as a whole. The client believed that it was because of his management skills and the skills of his team members. As a result, he dedicates himself to searching for a solution to improve the team’s performance.

What Would Be a Functional and Appropriate Size for a Successful Team?

After considering the team size experiment, my client decided the eight-member team into two teams for a trial run. When the team was reduced to four members, he observed that the amount of communication within the team increased. Those who were not often express their opinion in the past began to speak up and each member brought his/her ideas to the meetings. Slowly, there was a change in the members’ behavior. They became more understanding toward each other with more awareness of “What they can do to help others”. For this reason, he increased the overall number of people while changing the team structure in his organization to achieve become an organization that creates functionally work.

According to his opinion, four members of a team were too small. However, he was able to create a functioning structure by rearranging the team by using the “Dunbar number” as a hint. Of course, the Dunbar number is not the solution to everything because a small team may not always work well. Some other factors such as the management skills of leaders and the abilities of the team members are still important. But, “numbers” is also one important factor as well. As the number of people increases, communication between one person – too many people tends to increase while one-to-one communication becomes decreased and unbalanced. Organizations can be developed through one-to-one relationships. Most of the time, those communications focus on problem-solving and finding ideas. For this reason, coaching can be one of the significant tools to embrace the proposed ideas while challenging others to think together with the topic that was raised.

Developing a team requires an executive’s role. In many Asian countries, a top-down culture where subordinates need to follow their superior’s instruction without any obligation still remains strongly existed. In order to change this culture, executives must become a coach who shifts their role from being controllers to motivating their team by thinking together with them to create the best result. Coaching is based on the idea that the best way to move forward or develop does not come from being told what to do but from discovering what works best in each environment. As it is a structured communication, coaching brings the coach and client to explore not only the topic itself but also the being of each client such as what this topic is important to the client, what is their emotion, also what value they believe. It allows clients to stop and observe their own perspective, and mindset which will lead to their behavior and different working performance in the end.

To increase Team’s performance and collaboration can start with the individual leader(s) in your own organization. Changing Team performance is highly influenced by the leader’s mindset and behavior. The chart below explains the process of how can a team change from a leader who shifts/changes their mindset. 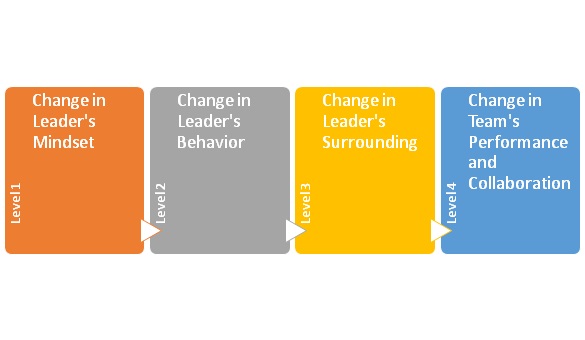 To make the change become more active and sustainable, creating sharing questions within a team can be a key for all leaders. When people “forget their goals” or are “unable to set their goals”, we unconsciously ask ourselves “Am I good enough now?”, “Is there anyone who doesn’t like me?”, “What will my future look like?”. If members of your team often ask these questions to themselves, the team will hardly achieve its goals because such questions are likely to path the way for people to become victims. On the other hand, if team leaders are able to create effective “Share Questions” across teams or organizations and utilize those questions to ask themselves instead of victim questions. It will allow team members to start discussions with more valuable perspectives. For example, “Is our service the best in the world?”, “What risks will we face in the near future?”

If an organization has “shared questions” about the future and dialogue that creates new perspectives at every level, it will expand the views and responsibilities, and roles of the team. Therefore, “Sharing Questions” is highly associated with increasing accountability in your team.

Working with leaders who lead cross-cultural teams of multinational members, I, sometimes, feel that experience and cultural knowledge are not necessarily factors that determine the success of the team. Some leaders are successful on their first overseas assignment, while others have extensive overseas experience but found themselves struggling with another cultural wall. The reason why it is challenging for a “cross-cultural team” with multinational members is that it is a generally frightening experience for people to be in an “alien situation”.

Numerous studies have shown that when people struggle in a new environment, they have the same “reactions” as hunters or soldiers entering a dangerous area. [4] In the new environment, the Amygdala, the center of the limbic system that controls threats is immediately activated and controlled to view those around them as unpredictable and suspicious to others. Different cultures or anything unfamiliar to the individual will instantly create stress in Amygdala. In other words, before a leader engages in a new and unfamiliar culture, the Amygdala of our brain will bias and use cultural differences as an excuse in the form of an antidote to our fearful experience. For this reason, training that provides knowledge about cultural diversity may alleviate fearful experiences through prior learning.

For this reason, instead of discussing diversity and how to blend in each cultural difference, leaders should return to their original goal, the business that the team wants to achieve. It is also crucial for leaders to keep their eyes on the success of the business and each person’s role and influence rather than discussing unresolvable racial and cultural characteristics.

When leaders find it difficult to lead their team in multinational culture, they might want to take a closer look at what they are focusing on as a leader. If the focus is on the aspect of “foreign culture”, the brain may create a defensive response.

(No) Secret Tips for Maximizing Team Performance and Collaboration

First, we should start with the mindset of believing that everyone in our team is a leader which accountable for 3 factors are accountable for the team’s success, being the main participant, not an observer, and making change continuously and proactively

Second, establishing a daily dialogue between team leaders is another key. Since the pandemic, we were forced to work remotely without meeting in person. Short dialogue for 20-30minutes among team members especially 1-to-1 basis can create a space where everyone can speak out their ideas.

Third, after setting up a leadership stance and creating spaces for dialogue between them, enhancing the quality of 1-to-1 dialogue is another step to come. Even though engaging in dialogue between team members could cause some conflicts but at the same time, leaders will be able to give feedback to each other’s regarding the proposed ideas and perspectives as well as what do they saw each other as a “leader” role. Having a dialogue about “what kind of team can we create” and “what kind of organization can we create” will motivate leaders to think together for shaping the team and moving forward to achieve mutual goals.

In a world where everything is unpredicted. Teams are often challenged with both internal and external factors. There is no obligation to leaders in the team to take action alone. Leaders should equip with abilities to enhance every team member to become leaders. Despite the fact that having an all-rounded leader could lead to success in the past, achievement in this new era cannot be done by an individual.

Leaders who can engage their members by utilizing coaching questions and creating dialogue for thinking together are more likely to achieve their desired results. Being a leader as a coach can encourage team members to think together and walk along with them throughout every challenge. As coaching is a unique tool to explore and rearrange mindsets that create actions, it will allow leaders who become a coach and members as a client to co-create appropriate actions, mindsets, and environments for achieving the goal.

[1] You can only maintain so many close friendships. May 20, 2021. Sheon Han.
[2] The Art of Managing Relationships in Interorganizational Collaboration. March 2003. Tyrone S. Pitsis, Martin Kornberger, Stewart R. Clegg.
[3] Coaching for developing team towards success. Jun 9, 2020. PonsaranRungcharoenkitkul.
[4] Cross-Cultural Leadership Skills Are Not What You Think. May 10, 2018. Gabor Holch. 2018 Chief Learning Officer, CLO Media.
[5] One Small Step Can Change Your Life. The Kaizen Way. January 1, 2009. Robert Maurer.

Empathy is Overrated: How Not Understanding Strengthens Your Practice

Visual Tools in the Coaching Practice

A Few Things to Note

Victim of Circumstances vs. Freedom of Choice

Expecting the Worst vs. Preparing for the Best

Become a Better Version of Yourself

No Result
View All Result